Snowtown
A sleepy wheatbelt town centred around the railway line.
Snowtown is located 145 km north of Adelaide in an area known for its ideal conditions for sheep grazing and wheat growing. It is one of those towns on the road north from Adelaide which is very easy to drive through. Stop and admire the old Institute building and the charming St Canice's Catholic church.

Penwortham
Tiny village surrounded by vineyards.
Located 123 km north of Adelaide, Penwortham is a tiny, inconsequential village in the heart of the Clare Valley which was founded by the famous South Australian explorer, John Ainsworth Horrocks.

Riverton
Small township which was once part of the transport route from the copper mines to the coast.
Riverton is 96 km north of Adelaide. It is characterised by an attractive tree-lined main street (Torrens Road) and a large number of interesting historic buildings ranging from the delightful old railway station to the cottage and outbuildings of August Scholz.

Port Wakefield
Historic port at the head of Gulf St Vincent
Port Wakefield is a sleepy, but historically important, little town which is semi-bypassed by the main road to Port Pirie. It is located 99 km north west of Adelaide and was once a major port for the entire region.

Burra
Historic copper town - one of the historic highlights of South Australia
By any measure Burra is a fascinating town. It calls itself 'An Historic Copper Town and the Merino Capital of the World', a title justified as it was declared a State Heritage town in 1994 because it has a wealth of outstanding historic buildings and offers a rare opportunity for the visitor to appreciate what life in a 19th century copper mining town was like. In more recent times the area around Burra has been used as a setting for films including the highly regarded 'Breaker Morant'.

Balaklava
Typical wheatbelt town with a number of attractive sandstone buildings.
Located 92 km from Adelaide and 26 km from Port Wakefield, Balaklava is an important service town with a number of interesting buildings. Although it only experiences 391 mm rainfall per year it is a quietly attractive town with rows of pine trees and green ovals and playing fields. In summer, when the rainfall drops to nearly zero and the temperature rises, the town is surrounded the dry barren landscape of the Mid North.

Watervale
Small village in the heart of the Clare Valley
Located 118 km north of Adelaide at the southern end of the Clare Valley, Watervale is a pretty town surrounded by vineyards. The town was named because it was located on a tributary of the Wakefield River although it seems to have been a general joke, certainly through the 19th century, for travellers to complain that they arrived in Watervale and could find no water at all.

Tarlee
Tiny historic township on the main road from Adelaide to Burra.
Located on the Gilbert River 79 km from Adelaide, Tarlee is a tiny town at the beginning of the Gilbert Valley. It probably derived its name from the Aboriginal word for the local water hole although this has been the subject of much dispute. There is a body of opinion which says it was originally named 'Tralee' by Irish workers and another opinion claims it was from an Aboriginal word 'Tarralee'. It was a rural centre which came into existence in the 1860s as a stopover point for the early traffic moving to and from the Kapunda and Burra mines. Many of the town's most attractive historic buildings date from that period. It was around this time, in 1868, that a number of blocks of land in the town were sold with a prime block next to the railway station fetching £30. 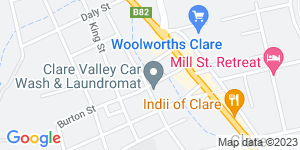