The town that time forgot

Once sustained by silver mining, the ghost town of Yerranderie reveals its secrets to Lance Richardson.

The spa, sauna and massage therapy at a French-influenced villa all spell 'me time', writes Louise Hall.

Take me to the river

Rise to the occasion

Lance Richardson surveys the patchwork of farms, gardens and suburbia on the western frontier of Sydney.

Wagga Wagga (including Wantabadgery and Forest Hill)
Major city in the heart of the Riverina
Situated on the Murrumbidgee River, Wagga Wagga is NSW's largest inland city and is considered the capital of the Riverina area of NSW. Halfway between Sydney and Melbourne and a two-and-a-half hour drive from Canberra, it is 214 m above sea-level and has a population of approximately 57 000. The name derives from a local Aboriginal word meaning 'place of many crows'.

Coolabah
Tiny village between Nyngan and Bourke
The tiny village of Coolabah lies on the Mitchell Highway 76 km north of Nyngan and 656 km northwest of Sydney. The village is now nothing more than a few houses. However this disguises a history interesting enough to have produced a substantial local history when the town celebrated its centenary in 1984.

Wellington (including Montefiores, Lake Burrendong, the Wellington Caves, Nurea, Bakers Swamp, Arthurville and Geurie)
Major centre west of the Blue Mountains
The attractive rural centre of Wellington, the second-oldest town west of the Blue Mountains, is located 369 km north-west of Sydney and 304 m above sea-level. It is a relatively large centre having a population of about 5700 with a considerable, and increasing, Aboriginal population. 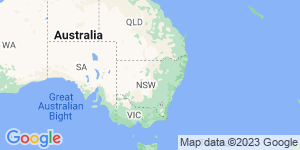