Country-style landscape and friendliness with city-style service and quality in the food and accommodation.

A foodie's retreat at the Royal Mail

Idyllic setting, with a premier foodie destination down the road - what more could you possibly want?

Gourmet getaway with the lot

The accommodation is lovely at the Royal Mail, but upstaged by the celebrated cuisine, writes Kate Armstrong.

Feeling like a weed in a manicured plot, Kate Armstrong embarks on a quest to find her inner gardener.

Om to a good thing

In the shadow of the mountains, Mary O'Brien discovers the gentle art of bend and stretch during a two-day yoga retreat.

Jeff Glorfeld explores a quiet town with a top chef and a mountain backdrop.

Dunkeld
Small township at the southern end of the Grampians
Dunkeld is a small rural town of some 450 people located at the foot of the Grampians and at the southern tip of Grampians National Park. It is 259 km west of Melbourne via the Glenelg Highway. The surrounding landscape is dominated by Mt Abrupt (827 m) and Mt Sturgeon (548 m) which were both named by Major Mitchell who was the first known European in the area. Mitchell camped for three days at the foot of Mt Sturgeon in 1836, during his Australia Felix expedition. 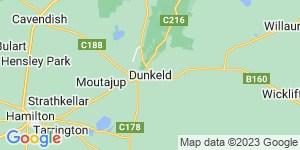