Korumburra (including Kongwak)
Once an important coal mining town, now a small service centre for the surrounding dairy and cattle farms.
Korumburra, the name possibly comes from an Aboriginal word meaning 'blowfly', is 117 km south-east of Melbourne via the South Gippsland Highway and 227 metres above sea level. It is situated in a region originally known to Europeans as 'The Wild Cattle Run' due to the livestock which roamed free after the Corinella settlement was disbanded in 1828.

Genoa (including Croajingolong National Park)
Major access point to the beautiful Croajingolong National Park
Located 497 km east of Melbourne via the Princes Highway, Genoa has the distinction of being the last township on the Princes Highway before New South Wales - or the first contact with Victoria if you're coming the other direction. Situated on the Genoa River just before the turn off to Gipsy Point and Mallacoota, it is 62 km south from Eden, 121 km northeast from Orbost and 23 km from Mallacoota.

Churchill
Modern township in West Gippsland built as accommodation for workers during the construction of the Hazelwood Power Station.
Located 158 km from Melbourne and 8 km south of Morwell and 140 metres above sea level, Churchill is a modern, purpose-built town which was constructed in the late 1960s. The aim was to provide accommodation for workers (and their families) who were involved in the construction and maintenance of the Hazelwood Power Station. Hazelwood, which is Victoria's second largest power station, was completed in 1971. The town was designed to cater for an eventual population of 40,000. With this in mind it is hardly surprising that, although the Power Station now uses only a small number of staff (around 60 people on each shift), Monash University has established its Gippsland campus here.

Heyfield
Small timber town at the southern extremity of the Snowy Mountains range.
Heyfield is located 203 km east of Melbourne and 58 metres above sea level. In 1841 James McFarlane selected a pastoral run in the area. He named the district 'Hayfield' after recording that it looked "like a field of waving corn". A settlement was developed when prospectors, headed for the goldfields, began to stop there. The first town blocks were auctioned in 1860.

Lake Tyers (including Nowa Nowa)
Historic town and forest park on the edge of Lake Tyers.
In a valley to the east of Lakes Entrance are the township, lake and 5300-hectare forest park of Lake Tyers, all named after Charles Tyers, a public servant who was appointed as the first commissioner for crown lands in Victoria in 1843.

Morwell
Important brown coal industrial city in the heart of West Gippsland.
Morwell, 148 km east of Melbourne via the Princes Highway and 80 metres above sea level, is situated in Victoria's energy centre, the Latrobe Valley. In spite of its English-sounding name, the word 'morwell' is thought to derive from an Aboriginal word that is thought to mean 'woolly possum'. 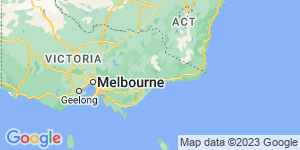