Eaglehawk
Old goldmining town now part of the larger Bendigo
The casual visitor, turning into the Loddon Valley Highway at the north-eastern edge of Bendigo, would probably think they were passing through an undifferentiated outer suburb of the sprawling city. However, the residential build-up hides the fact that they are, in fact, passing through an old goldmining town which was declared an independent borough in 1862 and which remained so until the early 1990s. Moreover, political and physical incorporation is not necessarily matched by genuine assimilation. Locals are very much aware of their identity as an independent goldmining past and a strong working-class settlement. This is reflected in the photographs of the town's past which adorn the walls of local business premises.

Moliagul
Tiny and historically significant gold mining town
Moliagul is a tiny old goldmining village that is now, to all intents and purposes, a ghost town. It is located at one corner of a district known as the Golden Triangle which has produced more gold nuggets than any other in Australia (the other corners are formed by Tarnagulla and Dunolly).

Melville Caves
Huge granite boulders once used as a hideout by the bushranger Captain Melville
When we think of caves we usually think of limestone caves with beautiful formations. The Melville Caves are not limestone. They are a collection of huge granite boulders sitting on the top of a massive granite tor in the Kooyoora State Park. It is the spaces between these huge boulders which form the 'caves' or 'cavities'. However, the cavities are, in fact, a series of large fissures which have formed in the weathered granite. They are located 205 km north-west of Melbourne via the Calder Highway and 21 km west of Inglewood (for information on the caves and the park, consult the entry under 'Things to See').

Maldon
Extraordinary historic town which looks as though time has stood still.
In 1966 Maldon became the first Victorian town to be classified by the National Trust. This honour reflects an appreciation of its remarkably well-preserved historic streetscape with its European trees, wide verandahs, flagstone paving, old-fashioned shop fronts, quaint cottages with attractive gardens, and its many stone buildings erected in the heyday of the goldmining era.

Dunolly (including Bealiba)
Small service centre once an important gold mining town.
Dunnolly is a small town of some 750 people which started out as a goldmining town with an alleged population of some 35 000. Its kurrajong-lined main street retains some attractive old buildings from its boom days. The area is now given over principally to farming though goldmining still occurs in the area. Dunolly is situated amidst attractive bushland 178 km north-west of Melbourne via Maldon and 23 km north of Maryborough.

Stanhope
Small dairy town
At Stanhope, huge stainless steel storage tanks associated with the Bonlac milk products company tower beside the Midland Highway and contented cows can be seen in adjacent paddocks, providing a clear insight into what constitutes the area's bread and butter, so to speak.

Rushworth (including Whroo)
Fascinating old goldmining town.
Rushworth is an old goldmining town which retains much of its original character through its many early buildings. It is located 166 km north of Melbourne via Murchison and 145 m above sea-level. Today there are about 1000 residents. 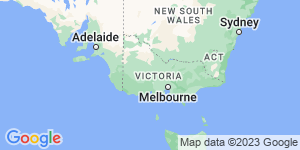