Jeparit
Wheatbelt service town famous as the home of Sir Robert Menzies, Australia's longest serving Prime Minister.
Jeparit's great claim to fame is that it is the birthplace of Sir Robert Menzies, prime minister of Australia from 1939-1941 and 1949-1966. A small and tidy town of some 500 people, it is located by the Wimmera River, 370 km north-west of Melbourne and 35 km north of Dimboola in an area given over to the production of wheat, wool, barley and oats.

Donald
Attractive service town on the banks of the Richardson River
Donald is a town of some 1700 people laid out around a serpentine stretch of the Richardson River which is popular with local anglers. It is located 259 km north-west of Melbourne on the Sunraysia Highway and 118 m above sea-level. A neat and tidy town, it is essentially a service centre to the surrounding district where wheat, barley, fat lambs and wool are the main produce, although there has been some recent diversification into peas, canola, safflower and other crops. The massive wheat silos bear testimony to the central economic preoccupation of the Wimmera district. Donald is known as the 'Home of the Duck' due to the prevalence of the waterbird on local waterways and the annual duck-shoot held in their honour. Perhaps another factor was the irresistible connection with that famous Walt Disney character.

Dimboola
Attractive wheatbelt town in the Wimmera.
Dimboola is a quiet wheatbelt town of around 1700 people situated on a fine stretch of the Wimmera River by the edge of Little Desert. It is situated on the Western Highway 334 km north-west of Melbourne, 35 km north of Horsham and 111 metres above sea-level. The surrounding area is given over to the cultivation of wheat, oats, barley and wool.

Stawell (including Dadswell Bridge and Glenorchy)
Substantial town famous for its professional running races.
Stawell is a former goldmining town of some 6700 people located just off the Western Highway, 32 km north-west of Ararat, 235 km north-west of Melbourne and 231 m above sea-level. It is a service centre to the surrounding district and supports a number of industries such as brick-production, goldmining, a substantial and very successful fabric upholstery concern and an abattoir, as well as more traditional grazing and farming.pursuits. With the Grampians close by Stawell has a growing tourism sector (see entry on Halls Gap). Just south of town are the wineries of Great Western.

Warracknabeal
Prosperous and substantial wheatbelt service town.
Warracknabeal is a prosperous country town in the heart of Victoria's wheat-belt. In fact it is the largest receival centre in Victoria with an enormous storage area at the northern end of town which was originally part of a power alcohol distillery that operated in World War II. Recent diversification has led to the cultivation of peas, canola, lupins and beans and the establishment of emu, ostrich and deer farms.

Natimuk
Small Wimmera service centre.
Natimuk is a small Wimmera town of some 500 people, located 324 km north-west of Melbourne and 25 km west of Horsham. Although it is essentially a small and sleepy settlement, nearby Mt Arapiles draws a variety of visitors to the area which has given the town a slightly cosmopolitan gloss.

Nhill
Important service centre in the heart of the Wimmera wheatbelt.
Nhill is a small town of some 2000 people on the Western Highway, 40 km west of Dimboola and 374 km north-west of Melbourne (halfway to Adelaide). It promotes itself as a centre of merino grazing although it is very much a part of the Wimmera wheatbelt. In fact the large grain silo in the centre of town is reputedly the largest single-bin silo in the Southern Hemisphere. There is also a poultry farm and a flour mill. 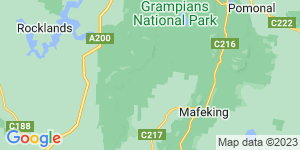