The food and wine alone are drawcards, but this town could do much more to trumpet its authentic and colourful Italian heritage.

Better than a winery: Distillery stay shows how it should be done

You don't have to give a dram about whisky, let alone love gin, vodka or craft beer to salute the accomplishment that the Malt House represents.

On the road to nowhere

La dolce vita Down Under

Ben Stubbs explores the traditions and stories of the Italian migrants who have shaped Griffth.

A road trip from Byron Bay to Broken Hill and beyond takes Penny Watson to old haunts and new favourites.

Bruce Elder visits the remarkable landscape shaped by a hermit over 25 years.

Griffith (including Hanwood, Bilbul, Beelbangara, Lake Wyangan, Yenda and Cocoparra National Park)
Major town in the Murrumbidgee Irrigation Area and service centre for the surrounding orchards and vineyards.
Located 613 km west of Sydney via the Great and Mid Western Highways and 131 m above sea-level Griffith, like Leeton, is a town which emerged out of the construction of the Murrumbidgee Irrigation Area (MIA) early this century. With a population of 25,000 it is the third-largest population centre in the Riverina. 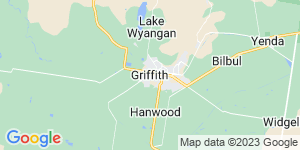