Gundy (including Belltrees, Moonan Flat and Ellerston)
Quiet and tiny settlement on Pages River near the country retreats of a number of prominent Australians.
Gundy is a tiny settlement by the Pages River, 300 km north of Sydney. It has an hotel-restaurant and a general store which serves light meals. However, it is a good starting point for taking a scenic drive through the pleasant countryside to the north-east of Scone.

Singleton (including Bulga and Warkworth)
Important service centre in the Hunter Valley
Singleton is situated on the banks of the Hunter River, 209 km north-west of Sydney via Cessnock. It has an elevation of 73 metres.

Gresford (including Allynbrook, Lostock Dam, Chichester State Forest, Mt Allyn and Barrington Tops National Park)
Small towns on the edge of the beautiful Barrington Tops National Park
Gresford and East Gresford are two small settlements separated by 2 km. They make an obvious base for an exploration of the area to the north where you will find lovely Allynbrook, Lostock Dam, Mt Allyn and the mountainous terrain of Chichester State Forest and Barrington Tops. East Gresford, on the main road to Maitland, is 196 km north of Sydney and 39 km north of Maitland.

Gloucester
Quiet rural township on the edge of the Bucketts.
Gloucester, known as the gateway to the Barrington Tops, is a charming country town nestled in a valley under a range of impressive monolith hills called The Bucketts. It is situated on the Gloucester River 96 metres above sea-level and is located 271 km north-east of Sydney on the Bucketts Way which heads northwards off the Pacific Highway 18 km from Raymond Terrace, passing through Stroud and, at Gloucester, veering east to rejoin the highway at Nabiac. To the east of town is the Mograni Range and just to the north of town, the Gloucester, Avon and Barrington Rivers meet. Gloucester has a population of around 2600. It is the principal town of a cattle-raising, dairying and mixed farming district. Local industry includes a large factory which produces milk products, a coal mine, an important cattle market and a nascent tourist

Murrurundi (including Blandford, Timor Caves, Ardglen, Willow Tree)
Small town at the edge of the Liverpool Range west of Sydney
Murrurundi is a small rural town of about 1000 people situated 327 km north of Sydney, 44 km north of Scone and 417 metres above sea-level. It is quite beautifully located by the Pages River at the foot of the Liverpool Ranges. Mountains loom impressively overhead, particularly to the east and west.

Tourist resort on the shore of Lake Macquarie

Hinton
Tiny historic township north of Morpeth
Located just 3 km north-east of Morpeth on the banks of the Hunter River and171 km north of Sydney, 40 km north-west of Newcastle and just 8 km north-east of Maitland, is the tiny village of Hinton which has some genuinely historic buildings though none of any great beauty.

Australia's oldest wine-growing region flies under the radar, but it's proximity to Sydney and elegant eateries make it well-worth a visit. 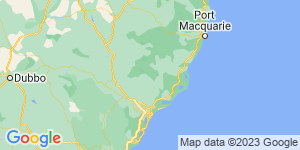 Australia's oldest wine-growing region flies under the radar, but it's proximity to Sydney and elegant eateries make it well-worth a visit.