Lizard Island is a research station for reef conservation, keeper of Aboriginal history, and a heavenly getaway.

Dom Perignon and lobster rolls on this luxurious Australian island

There's stiff competition for delightful ways to spend your time on Lizard Island.

Aussie island paradise virtually unchanged from when Cook discovered it

Lizard Island was put on the map by Captain Cook whose ship had become lost among the nearby labyrinthine low-lying reefs.

Fantasy island is a far-flung paradise

Rhapsody in blue and white

The grande dame of reef retreats doesn't stop at sand and snorkelling for Susan Gough Henly.

Stretching out on the world's most unusual beaches

Our writers stretch out on some of the world's most unusual beaches, from quirky to quaint, bizarre to beautiful.

Lizard Island
Exquisite island in the heart of the Great Barrier Reef.
Located 93 km north-east of Cooktown and 27 km from the Queensland coast, Lizard Island was known as Dyiigurra to the Dingaal Aboriginal people and was regarded as a sacred place. It was used by the people for the initiation of young males and for the harvesting of shellfish, turtles, dugongs and fish. The Dingaal believed that the Lizard group of islands had been created in the Dreamtime. They saw it as a stingray with Lizard Island being the body and the other islands in the group forming the tail. 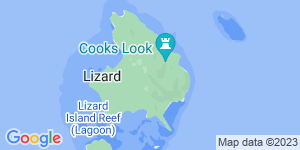