Be it saving bears, unearthing ruins or chasing miracles, special-interest tours get you to the heart of the action.

From Tasmania to the Top End, Paul Myers finds remote destinations that deliver adventure with style.

Daly Waters
A township which comprises a few houses and the very famous Daly Waters Hotel.
Even people who have never been to the Northern Territory know of the legendary Daly Waters Hotel. Today, with a population of about 23, the town of Daly Waters has little to commend it apart from its historical pub which is like no other pub you've ever seen before.

Daly River (including Woolianna)
Small, sleepy outpost on the Daly River.
Located 224 km south of Darwin, Daly River is one of those outposts of civilization which seems to belong more in a novel than in real life. The river was discovered in 1865 by Boyle Travers Finniss, the first Premier of South Australia and Government Resident in the Northern Territory. Finniss named the river after Sir Dominick Daly, the Governor of South Australia. The region lay untouched by Europeans until 1882 when copper was discovered leading to the arrival of a wild mob of unruly miners.

Timber Creek
Small town on the road from Katherine to the Kimberley.
Located on the Victoria Highway 285 km west of Katherine and 193 km east of the border between the Northern Territory and Western Australia, Timber Creek is a small centre which is rapidly growing in importance as a major stopping point on the journey from the Kimberleys to the Territory.

Mataranka (including the Never-Never)
Small township and a large resort near the Stuart Highway in the famous 'never-never'.
Mataranka is located on the Stuart Highway 1059 km north of Alice Springs, 423 km south of Darwin and 107 km south of Katherine. It was once unkindly described by the writer Sumner Locke Elliott as 'this lonely strip of barren and seemingly endless sandy waste of ant-hills and stunted trees - thick, hot red sand in the winter time and a sea of mud during the dreaded 'Wet".

Humpty Doo
Small town between Darwin and Kakadu.
Humpty Doo lies 47 kms from Darwin on the Arnhem Highway. It is famous for the fact that in the 1950s it was one of the great failed postwar agricultural experiments. 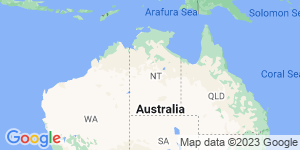