Shake out the picnic rug and raid the fridge - because when the sun is shining, nothing beats a picnic.

Sunnyside Cottage, Newham review: For those about to rock

The town may have changed but a familiar figure still casts a spell over Jo Chandler.

Bruce Elder indulges in the peaceful elegance of a 1920s manor and its grounds.

Tim Richards finds the best of country life in a town with award-winning pastries.

With her brood close, Allison Cox explores the volcanic formations and the fables that surround them.

Holgate Brewhouse at Keatings Hotel review: From pale to porter

Patrick Donovan finds full flavours during a stay at a country microbrewery.

Do the rounds of the kitchens

Tricia Welsh discovers fine food and how to make it .

Woodend (including Hanging Rock)
Quiet town near the famous Victorian 'Hanging Rock'
Woodend is located 69 km north-west of Melbourne at an elevation of 560 metres. It was literally named 'wood end' because it is where the Black Forest ended and consequently was a place where, in the 1850s and 1860s, prospectors, headed north to the goldfields around Bendigo, could feel that they were out of the reach of bushrangers who hid in the woodlands waiting to prey on them. A township coalesced around inns, shops and services which emerged to cater to the passing trade. Prior to European settlement the area is thought to have been occupied by the Woiwurung people. 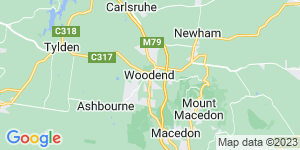